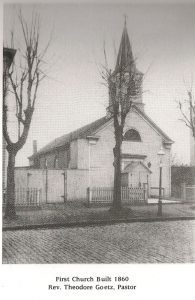 For more than 150 years, Catholics of Middle Village have found our parish, dedicated to St. Margaret of Antioch, Virgin and Martyr to be the center of their spiritual, cultural and social lives.  James Buchanan was President of the United States, the Civil War was still in the future, and neighboring communities to Middle Village bore names like Columbusville, White pot, and Penny Bridge when Bishop John Loughlin, the first Bishop of the Brooklyn Diocese, answered the request of some seventy families living in this community to build a Church for them.  Saint Margaret was chosen as the patroness of the new Parish.  She is numbered among the fourteen Holy Martyrs who figured very strongly in German devotion.

Our neighborhood had originally been settled by many English people, but by the mid-1850’s, as the cemeteries which characterize our neighborhood began to open, large numbers of German and Irish immigrants arrived, becoming the majority of the population.  No small number of them were employed by these cemeteries or in industries which existed because of them, the hotels ad inns which sprung up on the Williamsburgh-Jamaica Turnpike (over the years the turnpike became Metropolitan Avenue), stone cutters, and florists.  For the Catholics of this community, attending Mass on Sundays meant a journey to Saint Mary’s of Winfield (now Maspeth).

A French-born German peaking priest, himself recently arrived in the country, Father Theodore Goetz, who was then Pastor of St. Mary’s in Winfield, was given the job of building the new parish.  He obtained a small parcel of land from two families.  One of these was the Pullis family who had been residents of the area since before the Revolution.  The Pullis family cemetery still exists in the small fenced off area in Juniper Valley Park.  The second was the Carrhardt family, more recently arrived German immigrants.  The site chosen to build the church was at what we now call Juniper Valley Road (known as Juniper Swamp Road then) and 79th Place.  It was, coincidentally, near the original site of the United Methodist Church which is now located on Metropolitan Avenue.

On March 18, 1860, Fr. Goetz broke ground for the new church and a wooden building, sufficient in size to accommodate the parishioners, was quickly erected.  Most of the work was done by the parishioners themselves and the original church building (of which only a drawing exists) was a product f their own labors.  The first Mass was scheduled to be celebrated on May 20, 1860, but the day before the first liturgical service in the new building was held, Marie Kellar Klingbeck and Josofus Schneider were baptized, making them the first of thousands to be welcomed into the faith in St. Margaret Parish.  The first Mass was offered the following day, as scheduled.  On July 20, 1860, the feast day of St. Margaret, Bishop Loughlin arrived to bless the new church.  Six months later, on January 13, 1861, the first marriage was performed, uniting George Kempf and Anna Lavender.  In September, 1861, Father Goetz was reassigned to a new parish and Fr. Charles Peine became Pastor.  Fr. Peine baptized John William Hauptmann on August 9, 1863.  He later became the first person baptized in our parish to receive Holy Orders.  As a priest, he served at St. Margaret’s for a time and later became pastor of Saint Aloysius in Ridgewood.
During the period of the Civil War, larger numbers of German-speaking families moved into the Middle Village area.  Most of these were Catholic, and by the year 1865, it was decided to build a school.  It was a one-room, log building.  Classes (many of which were taught in German) were conducted by four laymen, Jacob Gebhardt, Robert Kortz, Casper Stutzer and Charles Weckerman. 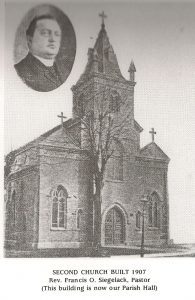 It is due to the effort of Fr. Thoma that the Dominican Sisters became a fundamental part of the education process at St. Margaret’s, a role they continue to this day.  Fr. Thoma built a convent for the nuns and they arrived on May 16, 1870, taking over the teaching assignments as of that time.  Later that same year, Father Alfred Kreutzer became pastor and, six years later, Father Henry Zimmer succeeded him.

Fr. Zimmer served as Pastor for 17 yeas, during which time he built a three-story rectory building.  In the years of his pastorate, the parish experienced another large increase in population and the small church and school showed signs of becoming inadequate for the increasing numbers of Catholics in the community.  In September 1893, the Diocese appointed Father John Willmann as pastor.  He served for slightly more than a year, and in October 1894 he was succeeded by Father Francis Siegelack.

Fr. Siegelack solved the problem of crowding in the church and school by constructing two new buildings.  In 1899, at a cost of $3,000.00, Fr. Siegelack built another three-story building, this a combined school and parish hall.  The building included two bowling alleys, classrooms, ad a hall where meetings and social events were held.  This building was on the site of the current parking lot and was demolished in 1970 to make way for the Parish Center.  It continued to be used long after our present school was constructed for kindergarten classes, a lunch room (where the bowling alleys had been) ad gathering place for small meetings and social events.  Any parishioner who still remembers the old building can still recall the creaking and groaning of its wooden stairs.

In May 1907, Fr. Siegelack’s second ambition was realized by the construction of our second church.  The church was more than four times the size of the original church and could seat more than 300 people.  The church had a steeple with a cross which was visible from most of Middle Village.  The building still stands, although it came close to being lost in a fire in 1990, and serves as the Parish Hall.

Father John Gopp succeeded Fr. Siegelack in 1909.  In the following year, the parish celebrated its 50th anniversary.  Parish records show that the number of parishioners increased more than ten-fold in those fifty years.  Classes were conducted in German until the mid-1890’s.

In 1915, steps were taken by New York City to drain Juniper Valley Swamp, partly to make way for Juniper Valley Park, and partly to open areas for housing in Western Queens.  One result of this was another dramatic increase in population and, in 1916, the arrival of the first assistant pastor to the parish, Father Francis X. Renner.  No longer would the parish have to depend on the service of a single priest.

After 17 years as pastor, Fr. Gopp died on May 1, 1926.  Father (subsequently Monsignor) Henry P. Kunig, was appointed pastor.  For the next 32 years, Monsignor Kunig was the spiritual shepherd of the parish.  He was, in many ways, the soul and spirit of the parish.  Societies and organizations wee founded and became active during his long term of service.  Shortly after Fr. Kunig arrived, he hired Dr. Norman McCulloch as organist and choir director.  Dr. McCulloch performed these tasks until his retirement in 170.  Monsignor Kunig’s great spiritual devotion was manifest in the care and attention he gave to the church and liturgical activities.  Realizing the inadequacy to house the almost five hundred students in the 1899 school building and also that the 1907 church was fast becoming too small, he broke ground for our present church and school building on March 17, 1935.  On June 23, 1935, the cornerstone was laid and before the end of the year the building was completed.  The 60th anniversary of that building is part of the celebration of the 135 years of the parish itself.  Monsignor Kunig spared little expense on the church.  He transferred the valuable European-made windows of the old church to the new and he filled it with religious statuary, paintings and murals.

After World War II, the parish experienced another great population.  The rectory was remodeled in 1941, but by 1945, it housed the pastor and as many as three additional priests.  It was replaced in 1951 by the current building and the original convent, built under the direction of Fr. Thoma in 1870, was finally replaced in 1956.

Two years later, Monsignor Kunig passed away.  He is buried in St. John’s Cemetery, almost directly across 80th Street from the entrance to the church.  It was a location he had selected and he had often joked about, saying that he could constantly watch the church he loved so much. 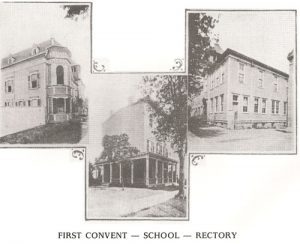 Father Ernest Fries became our pastor in 1958 and, in anticipation of the church’s centennial celebration, much redecorating was done in the church.  By the time of the centennial in 160, more than 17,000 claimed St. Margaret’s as their parish, this despite the fact that the creation of adjoining parishes over the years had shrunk the area of the parish by more than 60 percent.  When Fr. Fries retired in 1967, he was replaced by Father Anthony Mueller.  In response to the statements of the Second Vatican Council, Fr. Mueller oversaw the redecoration of the church’s interior to very much what it is today, causing the author of a previous parish history to comment on its leading to a “new spirit of simplicity.”

In 1970, Father Joseph Ostermann was named pastor.  Under his leadership, the Parish Hall was redecorated and modernized, and in the fall of 1971, ground was broken for the new Parish Center.  It was officially opened the following year.  Fr. Ostermann died suddenly in 1981 and a simple plaque hangs in the vestibule of the building he spent so much of his efforts in constructing.  His words sum up his life and relationship with his parishioners: “If you seek his monument, look into the hearts of those who loved him.”

Monsignor John H. Maurer was appointed pastor on October 17, 1981.  This was an unusual appointment as Monsignor Maurer grew up in the parish and attended school here.  But it proved to be a beneficial one to the parish.  During his time as pastor, the parish celebrated its 125th Anniversary, which included a Fourth of July Picnic, a History and Memorabilia “Museum”, a Dinner Dance, and most importantly, an opening and closing Mass.  Earlier that year, one of our parishioners, Vincent DeBiase, was ordained a Deacon and he continues to serve the parish.  The fire that damaged the Parish Hall, mentioned earlier, caused a major reconstruction of the building.  Its steeple was lowered and its roof replaced.  The high school and young adult C.C.D. program, whose home the building had been on Wednesday nights since 175, officially re-opened the Parish Hall with a “Coming Home” Mass celebrated by Father William Dulaney on January 19, 1991. 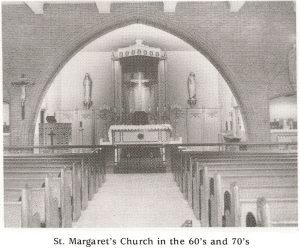 Like his predecessor, Fr. Ostermann, Monsignor Maurer was suddenly taken from us on April 27, 1993.  The funeral service held for him was, according to one author of a brief parish history, “a testament to the dedicated service and love he always gave t his people.”

Monsignor William A. Varvaro was installed as pastor on November 1, 1993.  Under his stewardship, our parish continues to flourish.  During his time as pastor, we saw some welcome repairs.  The sanctuary was completely refurbished.  An air-conditioning system was installed. Stained-glass windows and statues were cleaned and polished and space for devotion to the saints was created.  The church was rededicated on November 1,1994.  Monsignor Varvaro too, was suddenly taken from us on January 25, 2007.  His death was not only a great loss to St. Margaret’s but to the entire diocese.  Monsignor’s memory lives on in our hearts.

Our present pastor, Father Steven J. Aguggia, was installed on May 23, 2008.  He was named Monsignor during this, our 150th Anniversary Year.  Under his watchful care, more beautification to the church and property has been completed.  A Parish Planning Committee has been established. Various committees have been working diligently and progress is evaluated periodically.  Parishioners continue to be generous with time, talent and treasure. 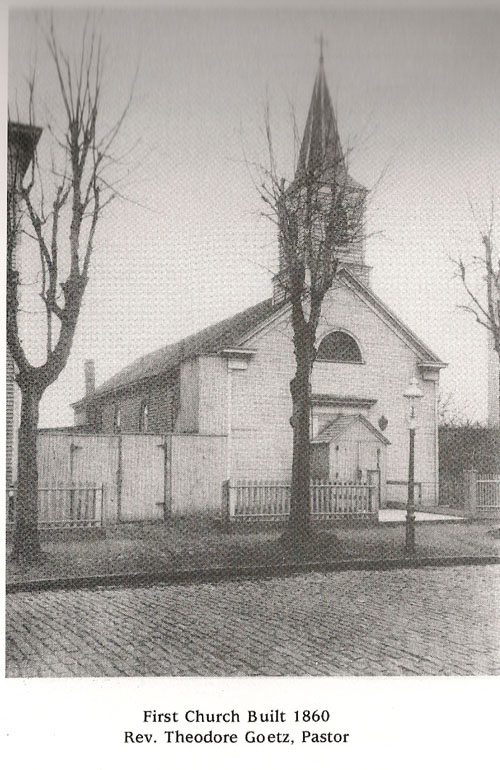 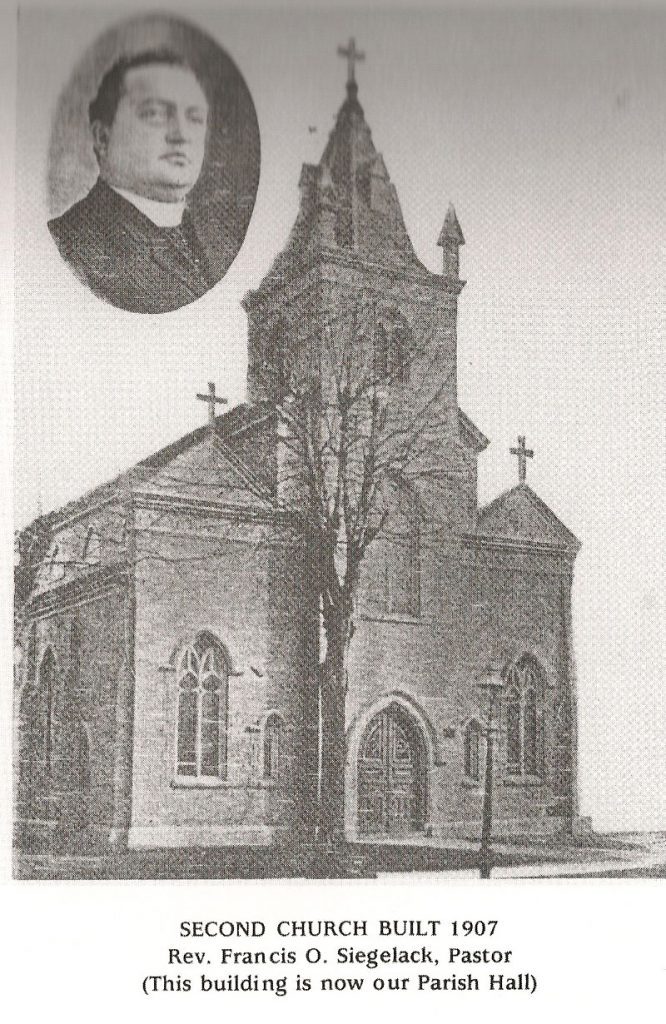 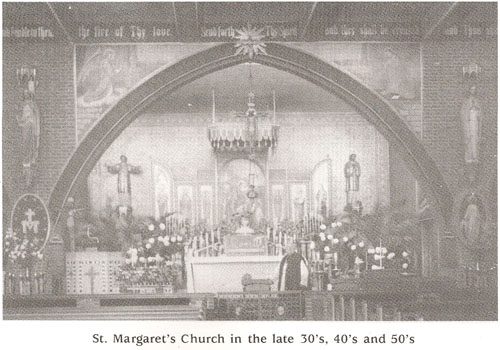 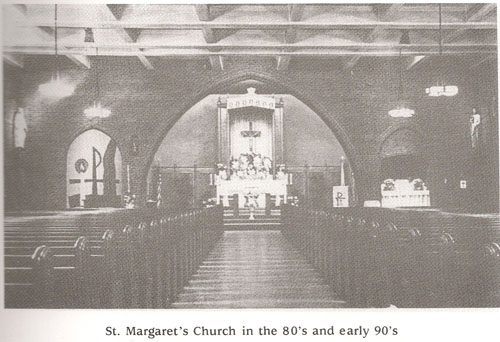 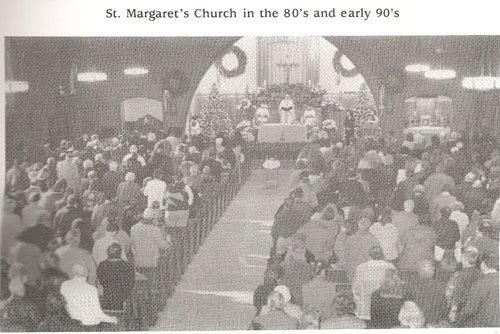 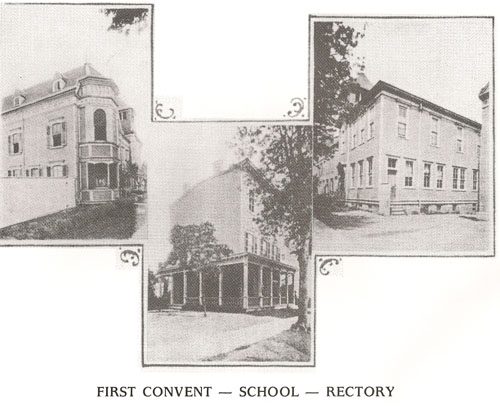