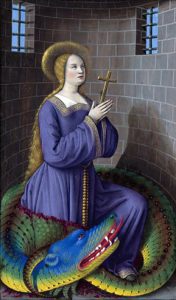 As with a number of saints from the early days of the Church, many of the details of the life of Saint Margaret of Antioch have been called into question as legendary rather than factual. Oral tradition holds that Margaret, who was also known as Marina, was the Christian daughter of Aedesius, a pagan priest in Antioch of Pisidia.  Driven from her home by her angry father, she became a shepherdess, and eventually faced imprisonment and torture when she spurned the advances of the regional Governor named Olybrius, who offered her marriage in return for her renunciation of her Christian faith.

It is said that while in prison, Margaret encountered the devil, who approached her in the form of a dragon. When the devil/dragon attempted to swallow Margaret, it is said that the cross she held in her hand so irritated his throat that he was forced to release her. As a result of this legend,
Saint Margaret has often been invoked as a patroness for pregnancy 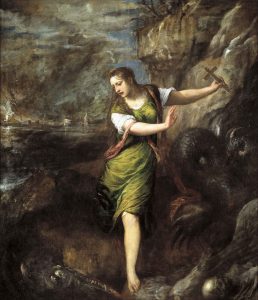 , childbirth, and women in labor, and is thought to provide safety from demonic possession and birth disorders. Accordingly, she is often portrayed in art as escaping from or standing atop a dragon. After defeating the devil in prison, additional efforts were made to kill her via drowning and burning at the stake, but she miraculously escaped these efforts. Ultimately, she was martyred by beheading in 304 AD.

Saint Margaret grew in popularity throughout the Middle Ages – especially in England – where her image and scenes of her life adorn the walls of over 250 churches. She was reputed to have offered powerful indulgences to anyone who wrote or read her life story – or who invoked her intercession. Her feast day is celebrated on July 20th.